Home » My Turn » Riding To The Gin

Riding To The Gin 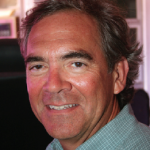 As I pedaled my new bike down the dusty turnrow toward the barn, I noticed bolls opening in the cotton field along the way, and I smelled the acrid stench of defoliant in the air. Inside the barn, I found my father and his men huddled around the biggest machine on our farm. It was a gargantuan thing, a one-row cotton picker! One of the men pulled down hard on a chain hoist that hung from a joist. They communicated in short clips. Down a hair. A little more left. Whoa! After a while, they had successfully married the IH picking unit to a Farmall tractor. Harvest was near.

Soon, the roads were congested with cotton trailers traveling slowly to and from the gins. Each little Delta town hummed with the noise of a busy cotton gin, and each was enveloped in a cloud of hemp like incense emanating from the gin’s smoldering burr pile. In the larger towns, the periodic hiss of steam at the compress punctuated time as if not only wealth, but time itself could be measured in bales of cotton.

After I settled into the routine of first grade, the season’s first chance to ride to the gin with Daddy finally came. Just after the school bus dropped me off one Friday, Daddy stopped in front of the house with a wagon load of cotton and beckoned me to join him.

It was a delightful fall afternoon. We poked along slowly with the heavy tow. I could feel the pride of showing off the bounty of the months of hard work. The stray locks of cotton that littered the roadside were confetti in our victory parade.

When we arrived at the gin, I was stunned. The yard was packed to overflowing with trailers! There appeared to be no room for another. Unconcerned with the dense clutter, Daddy turned off the highway, down into the throng, and meandered like Pac-Man through the disorderly maze until he found a spot to unhitch. Next, we found an empty trailer to pull back to the field, and we hooked up to it. It was a new trailer, and its running gear, made by the Electric Wheel Company, sported the coolest logo, a big jagged lightning bolt arcing across the rear axle.

Daddy worked the empty trailer back through the labyrinth, weaving this way and that. When I thought we were almost out, he stopped. I stood up in the floor so I could see over the dashboard. There were trailers blocking us in front and on the left. The ditch and highway bank bordered us on the right. We couldn’t back out. “We’re trapped, Daddy! There’s no way out. What’re you gunna do?” His head turned calmly toward me, but his darting gaze went all around me. He was looking for facts, not opinions.

I expected him to go ask for help. Instead, he popped the clutch! First, I was thrown back against the seat. He floored the gas pedal, steered the rig toward the highway ditch and hit it hard at an angle. Then, I was thrown forward, then over to the right. I was tossed all around the cab. He pushed me off his lap and he pulled me out from under his feet.

When the truck started the steep climb up the elevated highway bank, my face got plastered against the back glass. From there, I could see the trailer buck and kick behind us. Truck tires growled viciously in the grass. When the old Chevy jerked the trailer across the ditch, it seemed to explode as if Zeus had energized the lightning bolt logo with 10 million volts. The spinning tires reached the asphalt and screamed bloody murder. Their piercing cry continued until we inched forward enough and leveled out peacefully onto the plateau of the highway.

With calm restored, we both tried to hold back smiles.”

I settled down in my seat for the ride back home. A sleepy breeze swirled through the cab.

“Hey, Daddy, when we get back to the field, do you think the men will have another trailer ready for us?”

Print & Email
2014-09-01
admin
Previous: Southern Ginners Adjust To New Environment
Next: It Was A Busy Summer For Field Days