Being a ginner in the Texas Cotton High Plains has become significantly easier – if you are looking for quick repair on equipment or in need of a new part. That is the general consensus from ginners after the opening of the Lummus global parts facility in Lubbock last fall. The facility, located close to the Lubbock airport, has approximately 75,000 square feet with potential for future expansion. 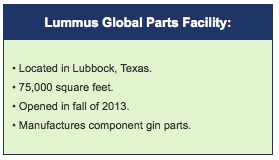 It is the primary manufacturing facility for ginning component parts, whether in machine assemblies or as repair parts. The new facility has the capability to re-wrap lint cleaner saw cylinders, re-stack/train gin saw cylinders and re-condition used machinery within the facility.

The Lummus domestic machinery sales management and product management teams also are located at the new Lubbock site. With the help of the Lubbock Economic Development Alliance, Lummus was able to build the facility in the Lubbock Business Park. The total capital investment in the project is estimated at $6 million.

“We decided that we needed a world-class facility like this, and Lubbock was certainly the logical location for it,” says Steve Marbut, Lummus president and chief executive officer.

“The overall plan is not only to make it our worldwide parts headquarters, but to expand and become more vertically integrated.”

The company’s decision to build the facility in Lubbock as opposed to another location is a commitment to an area that continues to be the center of the U.S. cotton industry.

According to company officials, the construction project was part of a long-term strategy that Lummus had planned for many years. “We have been executing a plan to build a bigger presence in Lubbock,” says Marbut. “We really like the area, and we appreciate the business support we have received from the city.”

Reaction from ginners in the region has been predictably positive. Most see the advantage in having quicker
access to ginning equipment parts – as opposed to waiting 24 hours for an overnight delivery.

More Efficiency At The Gin

“Lummus has always had a part when we needed it,” says Butman. “But it might be in Savannah, Ga. (home office), and it would take longer to get the part to us. The turnaround will be quicker now.”

Butman says his gin doesn’t necessarily “chase parts every day.” But he is quick to point out that “when we need to finish up a job, we will go get that part.”

Losing time at the gin is costly – especially if it happens during themiddle of ginning season.

“We had a lint cleaner go down the other day,” says Wilson. “The Lummus facility had the parts we needed and delivered them to us. It is this kind of commitment that makes us happy.”