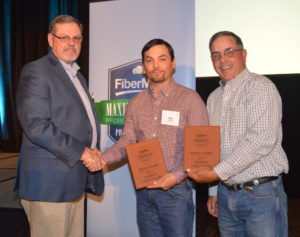 Bayer CropScience recently welcomed 75 new members to the FiberMax Maximizer Club, which recognizes cotton growers who plant FiberMax varieties and harvest at least 1,000 pounds per acre under dryland conditions. Their induction was based on yields from the 2017 season.

Altogether, 198 growers have qualified for the recognition since the program was inaugurated two years ago.

“There are a lot of challenges around producing on dryland,” said Steve Nichols, Bayer head of agronomic services, as he addressed attendees during the Maximizer awards banquet in Lubbock, Texas. “To achieve 1,000 pounds of lint on dryland acres is incredible. You have to rely on Mother Nature, and you have to be on your knees in prayer.” 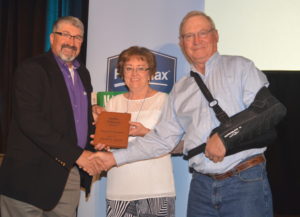 (from left) Noble Laminack, Bayer sales representative based in San Angelo, presents Janet and Charles Braden of Garden City, with an award for receiving the highest yield.

Bayer also recognized three operations that topped all inductees for the 2017 season.

Charles and Janet Braden of Garden City, Texas, had the highest overall yield with 1,795 pounds per acre.

And Tate and Jennifer Greer and Bart and Shawnda Greer, all of Greer Farms in Floydada, Texas, had the highest loan value – 54.84 cents per pound.