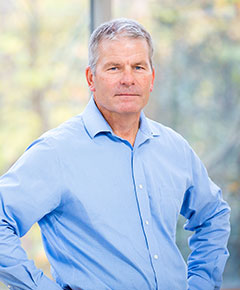 An entomologist well known to row crop producers throughout the South, Scott D. Stewart has been named the director of the West Tennessee AgResearch and Education Center in Jackson. Stewart, who currently serves in Jackson as a University of Tennessee Extension specialist in integrated pest management and professor in the Department of Entomology and Plant Pathology, will begin his appointment Oct. 1.

Known for researching agronomic and horticultural crops since its establishment in 1907, UT’s West Tennessee AgResearch and Education Center supports the work of scientists from several university departments. It also supports several U.S. Department of Agriculture Agricultural Research Service scientists and houses UT Extension’s Western Region Office as well as some offices of the UT Institute of Public Service and UT Martin.

The scientists conduct more than 100 investigations annually, with an emphasis on corn, cotton, soybeans and wheat production dating back to the founding of the center. In more recent years, forestry and ornamental and turfgrass research have also been emphasized, as the center is home to the UT Gardens, Jackson, one of three sites of Tennessee’s State Botanical Garden.

Once situated on the outskirts of the city, the center includes 647 acres near downtown Jackson. The land features 18 different soil types, which makes it a uniquely valuable facility for agricultural research.

No stranger to the center

Stewart is no stranger to the center, having worked there as a faculty member of the Department of Entomology and Plant Pathology since 2002. Prior to that, he served at Mississippi State University for seven years.

Among his best-known efforts has been as a leader in the development of the popular UTCrops.com website and news blog, which together serve as a hub of historic and week-by-week information for crop producers in West Tennessee and the Mid-South.

Hongwei Xin, dean of UT AgResearch, said, “I am extremely pleased to have Dr. Stewart join our team of research directors. We have a strong record of service to our clientele and to agriculture and natural resource conservation in Tennessee, and I am sure that Dr. Stewart will continue that tradition with his leadership.”

“I’ll enjoy working with an even wider group of scientists and stakeholders in Tennessee,” Stewart said. “My plan is to leave things better than I found them. That’ll be a challenge, considering the current director has done an excellent job.”

Stewart will have some big shoes to fill. Robert Hayes has served at the West Tennessee AgResearch Center for about 42 years, first as a weed scientist and since 2002 as center director. Hayes is retiring from service on Sept. 30.

Xin said Hayes has served with distinction, with among his many accomplishments including the opening of the center’s new research cotton gin and new greenhouse research facilities and the continued success of the UT Gardens, Jackson, and the annual Summer Celebration highlighting the nursery industry in West Tennessee.

Unfortunately, the COVID-19 pandemic caused the cancellation of this year’s celebration, but Stewart hopes to bring it back bigger and better in 2021.

Stewart will be the seventh director of the West Tennessee AgResearch and Education Center.

The University of Tennessee contributed this article.