A Century of Cotton

For the past century, Johnny Griffin’s family ties are woven into the fabric that is North Carolina agriculture. During the early part of that era, cotton and tobacco were grown as cash crops primarily by tenant farmers who rented small parcels of ground from area landowners. And according to the Encyclopedia of North Carolina, more than 200 cotton mills were constructed in the state from 1914 to 1921. 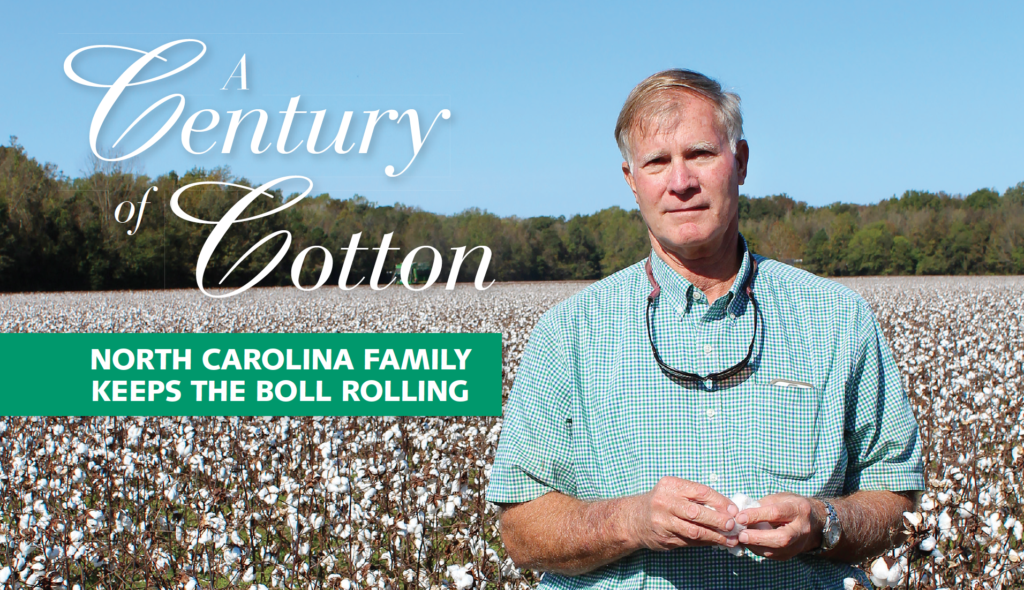 Johnny’s grandfather, Charles B. Griffin, started farming with his brother as Griffin Brothers, and operated Woodville Supply Cotton Gin in Lewiston. His maternal grandfather, William Greene McCollum, worked for Carolina Cotton & Woolen Mills Co. his entire life. Charles B. Griffin Jr., along with his brother, took over the operation in the 1950s.

“My father and uncle ran cattle and farmed about 300 acres, but five or six tenants mostly worked the property we owned,” Johnny says. “Growing up, I watched the farm operate throughout the season. After three years attending North Carolina State University, I took a summer job on Ocracoke Island and stayed for 10 years, primarily operating a wholesale fish market and working as a goose-hunting guide for a time.”

In 1982, Johnny moved back home to the farming and ginning operation in Bertie County. A few years later, his cousin, B.B. Griffin, joined him. The two men tore down their old “one-horse gin” and updated it to a more “modern” facility.

In 1982, Johnny moved back home to the farming and ginning operation in Bertie County. A few years later, his cousin, B.B. Griffin, joined him. The two men tore down their old “one-horse gin” and updated it to a more “modern” facility.

“B.B. was more interested in running the gin and participating in industry organizations,” Johnny says. “He was elected chairman of Cotton Incorporated in 2014. I enjoyed taking care of the farm, initially starting with four-row equipment, and then moving to eight-row machines after three or four years. With the advent of six-row cotton pickers, we transitioned to 12-row equipment in the early 1990s. Today, we have one six-row basket picker and one six-row John Deere baler picker that help us harvest in a timely manner.”

Johnny’s son, Mac, graduated with a business degree from Elon University and then worked for a few years in Wilmington, N.C., and Jackson Hole, Wyo. In keeping with the family tradition, he returned home in 2011 to farm with his father. In 2016, they grew 1,630 acres of cotton, 800 acres of clary sage and about 40 acres of food plots for doves and ducks.

Two Years Of Adverse Weather
“I have seen a lot of changes in farming practices since I was a child in the 1950s,” Johnny says. “And I have experienced firsthand the fickleness of weather patterns during the growing season.”

In 2015, two tropical storms came through, causing a week to 10-day period of gloom and rain around Labor Day when the cotton was cracking and trying to open up, he recalls. “We didn’t lose a huge amount of yield, but we lost money in quality, which was off 5 to 6 cents due to all the rain.”

On Aug. 1, 2016, Johnny says his cotton was “as pretty a crop as I have ever seen. It was beautiful.” By Sept. 1, it was all on the ground following a relentless heat wave that caused more damage than the tropical storms and the hurricane that subsequently followed.

“Our farm averaged about a 2½-cent discount off the cotton’s loan value, which wasn’t as bad as the year before. But we averaged only 700 pounds per acre, and I’m not happy with that. I want a 2-bale-plus crop and want all our gin customers to have one, too.”

“In my opinion, the Deltapine varieties seem to perform well under stress conditions, which is what we have put them through for the past couple years,” he says. “My goal this year is to plant DP 1646 B2XF, DP 1639 B2XF and DP 1725 B2XF — an early to mid-maturity variety from the Class of 17.”

In March or April, the Griffins run a ripper shank down the old mowed stalks. “We allow time for the rows to set up, and then use no-till planters equipped with satellite guidance systems. We plant right on the top of the split in the ground created by the ripper shank. It’s a simple process.”

Problem Weeds In Cotton
The primary weeds that pose a challenge to the Griffins’ cotton crop are marestail and Palmer amaranth (pigweed), joined by the occasional morningglory around the corners of the fields.

Johnny’s weed control begins with burndown that includes 2,4-D, Valor and glyphosate herbicides. He applies Reflex — a residual — behind the planter. When the cotton is about 4 inches tall, he comes in with glyphosate and Dual Magnum. Later in the season, he sometimes tankmixes glyphosate with a plant growth regulator or an insecticide, depending on the timing.

“This approach typically takes care of weeds for us,” he says. “We like overlapping residuals, and we’ve also been on a very regimented program of pulling Palmer escapes out of the fields at harvest. If we are able to use XtendiMax herbicide this year, there may not be any escapes. All of our varieties will be XtendFlex cotton again this year.”

Clary Sage
For many years, the Griffins farmed 100 percent cotton. In the fall, they planted a 2½-bushel-per-acre cover crop of wheat or rye — typically wheat — that served as a non-host crop for nematodes and soil pathogens that cause disease in cotton.

In an effort to add a rotation crop to the mix and take advantage of a local niche market, the Griffins began raising clary sage about four years ago.

“I felt like we were getting a little yield lag from planting cotton behind cotton for so long,” Johnny says. “Now we plant clary sage two years in a row, and then come back with cotton. We contract our sage with an oil extraction plant here in Bertie County. A few area farmers raise this crop, and the rest is grown in Oregon.”

Although the Griffin family works hard to carry on its 100-year farming legacy in northeastern North Carolina, they also enjoy gathering with friends at their hunting club on about 1,300 contiguous acres to hunt deer in the winter and turkey in the spring.

“It’s not designed to be a money-maker,” Johnny says, “but we all agree it’s a lot of fun.”