[highlight]Editor’s note: An article published in an earlier edition of Cotton Farming inaccurately stated the current minimum wage in California. The following article and charts reflect the accurate numbers.[/highlight]

Right about the time most bleary-eyed revelers were yelling “Happy New Year,” a slew of new California state laws took effect, including some with a direct affect on those engaged in the farming trade. The state’s minimum wage went up to $10.50 per hour for businesses employing 26 or more people. Those with 25 or fewer on the payroll still have a $10 minimum wage until Jan. 1, 2018.

A bulletin from Farm Employers Labor Service (FELS), an affiliate of the California Farm Bureau Federation, shows that the minimum wage for larger employers will go to $11 per hour in 2018, and then increase by a dollar per year until it reaches $15 in 2022 (2023 for smaller employers). After that, it will be adjusted according to the Consumer Price Index.

‘On the Fence’ Numbers
One potential pitfall awaits businesses whose payrolls hover around the 25-worker border: which wage applies and when. The state Department of Industrial Relations addressed the issue on its website, recommending that employers whose payrolls reach 26 during a given pay period pay the higher wage for the duration of that period and beyond, so that they minimize the risk of underpayment claims.

“The change of the threshold for most employers will occur as a result of ramping up seasonally for pruning, harvest or some other activity,” says Bryan Little, chief operating officer of FELS. “Employers will need to carefully consider whether it’s worthwhile to move back and forth between the implementation schedules. State law requires employers to notify employees of changes in their wage rate, and failure to comply can expose an employer to significant penalties. Shifting wage rates might also create employee morale issues.”

For example, Aaron Lange, who runs viticulture operations for LangeTwins Winery and Vineyards in Acampo, is among those confronting the rise in labor costs. He pays a piece-rate to his pruning crews and says, “New minimum wages always affect us, regardless.”

In setting the piece rate-for a given field, “we actually go out there and prune, and do a test run,” Lange says. “Then we set a target wage,” which is a minimum amount of work and pay he wants his crews to reach or exceed.

“Most of the time, our crews will do far better than that target wage,” Lange says.

Lange says that when the minimum wage goes up, so does that target wage.

“Most of our crews already are earning $12 and $16 an hour,” Lange says, “which is fantastic, because they’re earning far greater than just the minimum wage. They’re pruning more vines in a shorter amount of time, and they’re able to go home with higher wages on a weekly basis … and working shorter hours. So it’s a win-win for both the employee and the employer, although we have more onerous timekeeping and administrative work to deal with as we handle piece-rate payment schemes.”

Truck Exemption
Farmers and ranchers who use their pickups at work and at home now have an exemption from the state’s Basic Inspection of Terminals program, thanks to Assembly Bill 1960, signed into law in September. The BIT program requires those operating vehicles for business purposes to pay a fee and submit to periodic inspections at the place of business or at highway weigh stations.

The Legislature had revamped the program a couple of years earlier to match federal weight and length limits, snaring a large number of private pickups in the process, says Andrea Fox, who works on transportation issues for CFBF in Sacramento.

“The description of a pickup truck in the code is 11,500 pounds,” she says. “Most pickup trucks of any size are now at least 12,000 to 13,000-14,000 (pounds). It brought all of those into BIT, requiring them to have a commercial license and all the things commercial vehicles have to have. This bill was a fix for that.” 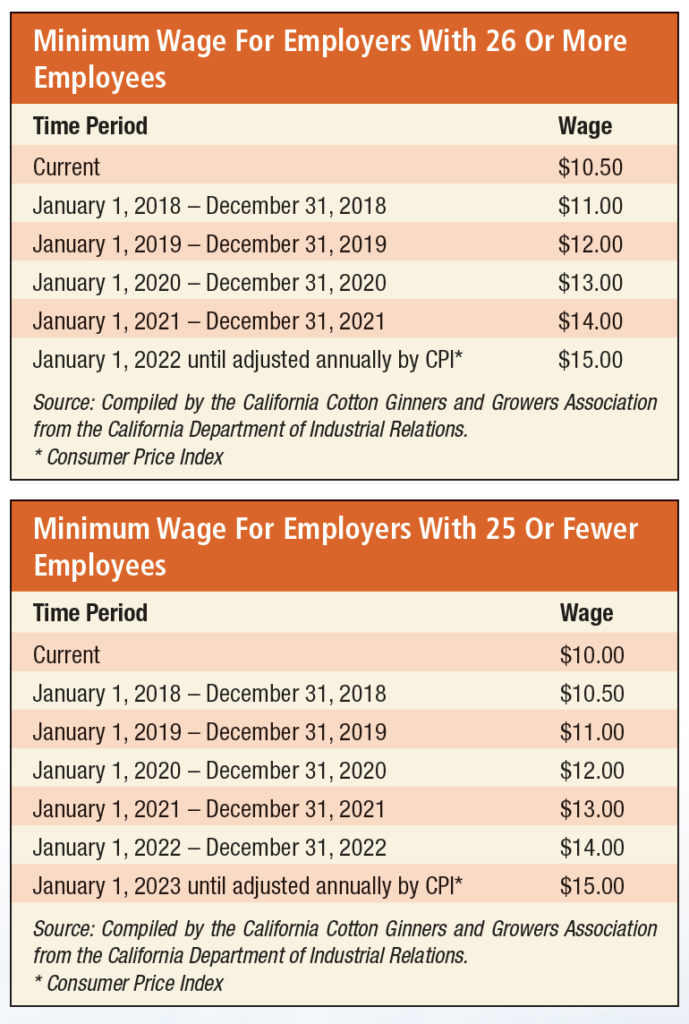 Read The Fine Print
AB1960 makes an exception to this program for farmers and ranchers, provided the pickup is not hired out, is driven by the farmer or his employees, and is used only for the individual’s business; the gross weight of the vehicle does not exceed 16,000 pounds; and the vehicle and a trailer combined don’t weigh more than 26,000 pounds or stretch longer than 40 feet.

Farmers and ranchers who use their vehicles commercially in any way still have to take part in BIT, Fox says.

“If they take that pickup truck and they put a trailer on it and they haul equipment to another farm to do work, then it doesn’t get the exemption,” Fox says.

The exemption ends Jan. 1, 2023, at which time the California Highway Patrol and the Department of Motor Vehicles will report on the law’s effects to the governor and the Legislature.

The California Cattlemen’s Association sponsored AB1960, with CFBF aboard as a co-sponsor.

California Farm Bureau Federation contributed this article. Kevin Hecteman is an assistant editor of Ag Alert. He may be contacted at khecteman@cfbf.com.