The Texas A&M AgriLife Extension Service and the Texas Plant Protection Association have collaborated on a Flag the Technology program that identifies crop fields tolerant to certain herbicides.

With two new herbicide-resistant technologies that will be widely used in cotton, corn and soybeans, program coordinators say it is critical farmers know which fields are safe for application of the new products and which are sensitive to them.

The program, which originated in Arkansas, helps farmers identify fields safe for application and those that must be avoided to prevent unintentional damage to the producer’s field or to adjacent crops. Farmers place colored flags at field entry points, with each color representing a different technology. The flags make herbicide applicators aware of which products are appropriate and safe to use on a specific field.

“Farmers throughout Texas will be learning more about this program throughout 2017,” says Dr. Travis Miller, AgriLife Extension interim associate director for state operations in College Station. “We will also distribute a publication to help explain the flags used in the system, and AgriLife Extension faculty will be discussing flag technology in producer meetings.” 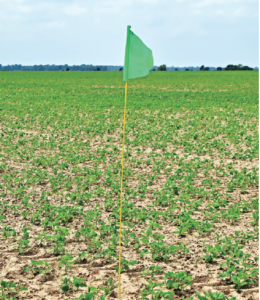 The mobile app will also be available to spray applicators so they can check flag colors upon entering a field. The flag indicates which products they can use.

The following are flag colors and uses:

“That information will be available to pesticide applicators,” he says. “Individuals must register to use the system. Producers who register will specify field location and add the crop or sensitive nature of the area.”

Coulson says producers would need to calculate field dimensions. With that information logged in, the producer can go to the Flag the Technology program and select the color flag needed for the fields.

“The applicator will have a dashboard with the field profiles included to prevent off-target applications,” he says. Coulson adds that Hit the Target will soon transition to a new program, which can be accessed via a mobile device.

Sink says the Flag the Technology app is user friendly. “It loads within five seconds,” he says. “The pesticide applicator is aware of where sensitive crops are located and can adjust flight plans to avoid those areas.”

The mobile app will be available free from iTunes and Google Play. A publication about the program is available for download at http://bit.ly/2j9Sce0.