[highlight] Irrigation Strategies – Part 2 is available here. In that installment, irrigation experts will address efficient, profitable irrigation methods used in the Southwest and West regions of the Cotton Belt.[/highlight]

Watering cotton to prevent drought stress and improve yields is not a new concept. However, implementing modern technology to improve water-use efficiency and profitability takes irrigation to the next level. 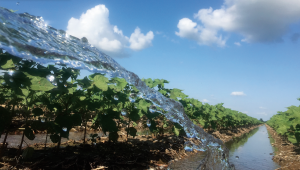 “Watering a field consists of turning the water on, and then turning it off either when you think it’s done or when water is running out of the bottom,” says Mike Hamilton, Extension irrigation instructor for the University of Arkansas System Division of Agriculture and NRCS. “Irrigating a field means using the tools available to us to efficiently put on the correct amount of water in the appropriate amount of time without any runoff or waste.”

After graduating from Arkansas State University, Hamilton spent 18 years as an Extension county agent in Poinsett and Crittenden counties. During this time, he worked closely with now retired Arkansas irrigation specialist Phil Tacker, conducting irrigation tests and county demonstrations to help farmers improve their irrigation practices and realize the full potential of their farmland. In 2015, he accepted his new position, which is funded equally by Extension and the Arkansas NRCS.

“In the beginning, I started running PHAUCET, a computerized hole selection program,” Hamilton says. “This is a computer software application developed by Missouri’s NRCS that calculates the pressure in the tubing to give us the correct hole size. These calculations help the water flow evenly down the furrows so it won’t run off at the bottom of the field, which improves irrigation efficiency. Later, PHAUCET was used as a template to design Pipe Planner – a free, web-based application developed by Delta Plastics.”

Pipe Planner has a mapping feature that uses Google maps to calculate pipe length, furrow spacing, furrow direction and elevation change along the polytubing. The well volume discharge can be determined with a flow meter. Once Pipe Planner has this information, it calculates the type and size of polytubing needed, the size and number of irrigation holes, the estimated time for effective irrigation and where buildup is necessary to compensate for elevation changes.

“If farmers want to be more efficient in their irrigation practices and try to save water, the first thing we do is measure the well,” Hamilton says. “We have to know the amount of water that is available and the size of the tubing to get an accurate design for the field. The tubing size is determined by the flow of the well. For example, if the flow is 1,200 gallons of water per minute or less, we use 12-inch tubing. If it is 1,200-2,200 GPM, we use 15-inch tubing, for 2,200 GPM we need 18-inch, and over 2,900 GPM we have 22-inch tubing. These sizes could change depending on elevations or how far we have to use the tubing to supply water to other sets.

“Producers have access to flow meters across the state through their local Extension and NRCS offices to measure the well if a farmer doesn’t own one. Then we use computerized hole selection to get even flow in every furrow so the water gets to the bottom of the furrow in a uniform manner. This saves water and fuel and makes more profit in the long run. Pipe Planner now does a lot of the math that PHAUCET didn’t do.”

Before the Pipe Planner buildup feature was available, farmers basically had to guess where to put barrels to relieve the pressure at the bottom of the furrow. Now that they can tell exactly where the buildup is needed, dirt or barrels can be placed in the correct spots. Some farmers use a jack to raise or lower the tubing to keep the water flowing uniformly.

Don’t Get Behind!
The next step in achieving irrigation efficiency is irrigation scheduling as opposed to just turning on the water every Monday morning, for example.

“We want to give the crop what it needs when it needs it,” Hamilton says. “We are doing that with the Arkansas Online Irrigation Scheduler program. Although the scheduler helps determine when to irrigate, it calculates every field individually. If you are trying to get across four fields serviced by one well and have a rainfall event, all four fields are zeroed out. The scheduler will then tell you to start irrigating all four fields on the same day, which is not possible. At that point, you can see what your irrigation needs are, then take into account that you have to start irrigating a little earlier so the last field will not be behind, causing plants to stress and start shedding fruit. If you get a rain on Tuesday, then the scheduler will probably tell you to start irrigating Wednesday or Thursday of the next week. Instead, you can start irrigating on Tuesday, so by the time you get to Thursday, you are across the majority of those four fields.”

Hamilton says it’s important to always know how long it will take to irrigate the land that the well services in order to satisfy irrigation needs.

“The bottom line is, don’t get behind on the front end,” he says. “Once you get behind, you can’t catch up.” 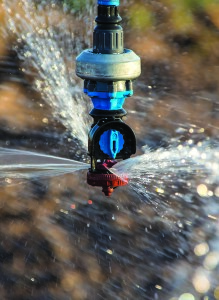 Surge Valves
A surge valve is another tool that can improve irrigation efficiency by dispensing water from left to right. If PHAUCET or Pipe Planner tells you it will take 24 hours to get 3 acre inches of water on the field, and the water is actually running out the bottom in 12 hours, then the crop is not getting the correct amount of water.

The surge valve will switch to the soak cycle and cycle the water to the left, then cycle it to the right so water gets to the bottom of the furrow in the correct amount of time. The surge valve will cycle from one side to the other to advance the water to the bottom of the furrow. Then it will switch from the advance cycle to the soak cycle to get the correct amount of water on the field.

“A surge valve gets the water down into the soil profile so the crop always gets the correct amount,” Hamilton says.
Since improving irrigation does involve capital outlay, the government provides irrigation cost-incentive programs. Hamilton recommends that farmers call their NRCS office to sign up for Irrigation Water Management plans on their farms. Cost-incentive payments are available for things like flow meters, surge valves, land leveling and pumping stations. The more you do, he says, the better your plan will be.

“We have some critical groundwater areas in Arkansas,” Hamilton says. “Our goal is to increase irrigation efficiency one field at a time. We want to sustain water availability in Arkansas forever.”

We are committed to helping farmers achieve higher yields with fewer resources.”

Irrigation Consultant Finds Niche
Agricultural irrigation water in Mississippi also is garnering a lot of attention today. According to state law, surface water and groundwater technically belong to the state, not the landowner, and every well is required to have a permit. However, farmers are good stewards of the land and are interested in achieving as much efficiency with their irrigation systems as possible.

When Nick King of Yazoo City, Miss., graduated from Mississippi College, he joined his father’s crop consulting business – King’s Ag Consulting. One of the services they provided to their farmer clients was irrigation scheduling. The timing was good for Nick, who was interested not only in irrigation scheduling but also improving irrigation efficiency.

“New irrigation technology was coming to the market at that time, and I jumped on the bandwagon,” King says. “Some of our farmers had soil moisture sensors that we had to read manually two or three times a week. After a year, we saw the need to get that information in real time. With that in mind, my partner, Daniel Cole, and I decided to develop our own technology line under the parent company King Cole Technologies.

“Today, we have a broad product line that is manufactured in Yazoo City and branded under Precision King. The web-based application that Daniel developed is very farmer-friendly and easy to use. All of the Precision King devices are easily accessed in one account with one user name and one password. Richard Pickens is the COO of the business. He is the guy who makes everything ‘go.’”

In addition, Precision King offers a pump automation unit, which is a box with a custom computer and cell phone modem. This allows a farmer to start and stop an electric well from a computer, iPad or cell phone. A timer function allows him to shut off the well at a specific time. The pump automation unit also will remotely stop diesel motors. A flow meter can be added to the pump automation unit and will remotely read how many gallons of water are coming out of the well. “The unit records the flow meter data, and the farmer can print out a report at the end of the year for recordkeeping purposes,” King says.

“If a farmer has a pivot, the unit is placed on the end tower, and we can monitor it with GPS, which allows us to track its progress,” he adds. “A stop command can remotely shut off the pivot and the pump at the same time. Another function we built into that unit is a ‘stop bearing’ that tells the pivot where to stop. We also have an alert system that will tell the farmer if there is a flat tire or a mechanical failure, such as the motor dying or a drive shaft going out, which causes the pivot to stop.”

Other products include a weather station that reads wind speed, wind direction, wind gusts, rainfall, temperature and humidity and a rice unit that has a water level sensor that allows the water level in a rice field to be remotely monitored. To help defray some of the cost involved in investing in new irrigation technology to achieve greater efficiency and, ultimately, profitability, the NRCS in Mississippi offers cost-share programs. Contact your local office for details.

“I have spent 20 years walking fields, so I know what a stressed crop looks like,” King says. “Today, I am a full-time irrigation consultant. We implement the irrigation technology, determine water use for the different stages of the crop, and make determinations about when to irrigate efficiently and when to terminate irrigation. We are committed to helping farmers achieve higher yields with fewer resources.”