On Nov. 10, the Texas Farm Bureau reported that less than 5 percent of Texas is now suffering from dry and moderate drought conditions, thanks to recent rains.

Lingering areas of drought still exist near San Angelo, Wichita Falls and Crockett, according to the Texas Water Development Board’s Water Weekly report that was released on Nov. 9.

Only 4 percent of the state is in the abnormally dry and moderate drought categories. That’s down from 16 percent in the first week of November and 48 percent a year ago.

Although rainfall helped tamper the drought, TWDB reports reservoir levels are up, but not as high as they were in July.

Russell Patterson:
2015 Ginner Of The Year

The award is given each year to honor and recognize an individual who has provided dedication, knowledge and special service to this association as well as the ginning industry.

This year’s recipient graduated from Fresno State University in December 1978 with a bachelor of science degree in business administration, with an emphasis in finance.

He also managed a small business group. His last banking position was in the Bakersfield Commercial Lending Group where he managed a $50 million portfolio of loans/lines of credit for growers and processors.

In 2001, Russ was employed by Tech Ag Financial Group, where for the past 14 years he has provided crop financing as a tool to obtain business for our chemical, fertilizer and ginning business.

In 2007, he was asked to include as part of his duty managing Buttonwillow Gin for one year until a replacement was found. Patterson did such an outstanding job that he was convinced to manage the gin for the next seven years.

From the association’s perspective, Patterson has played an active role from his first day as a board member, all the way up to becoming the second vice president.

He is the first one to show up at every board meeting, never misses a board meeting and has even traveled to Sacramento numerous times for association activities. 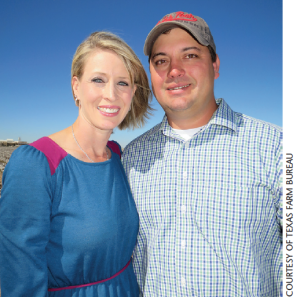 For their service to rural Texas and their performance as agricultural producers, Texas Farm Bureau  has recognized three young farmers and ranchers as finalists in this year’s Outstanding Young Farmer & Rancher competition.

The 2015 Outstanding YF&R finalists are: Galen Franz of Victoria; Timothy and Lindy Gertson of Lissie; and Marcus and Amy Halfmann of Garden City. Finalists are chosen from each of TFB’s 13 districts. Franz, the Gertsons and the Halfmanns were chosen to move on as finalists.

Marcus has a custom farm business and uses cotton burrs, or gin trash, to create his own compost. Amy is a dietitian who works at her children’s Mothers’ Day Out program. The Halfmanns have a son, Byler, 4; and daughter, Blakley, 2.