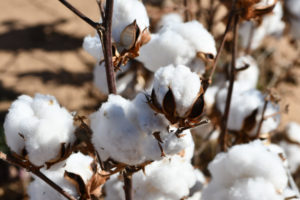 As crop production plans are adapting to the declining water levels in the Ogallala Aquifer, cotton is playing an increasingly important role in water conservation.

While relatively new to the northern Texas Panhandle, cotton has a role in the region’s water conservation plan, as many farmers are proactively adopting drought-tolerant crops to extend the life of their water supply, said Dr. Jourdan Bell, Texas A&M AgriLife Extension Service agronomist, Amarillo.

How much water does cotton take?

In this region, cotton requires 12-24 inches of water per acre compared to the 24-30 inches per acre for corn, she said.

But it is more than just the total seasonal water use that is playing a role in the viability of cotton, Bell said. It is the periods of water use.

“Cumulatively, this is a significant water savings,” Bell said.

It is important for producers to have a good understanding of the well capacity they have when it comes to deciding between corn and cotton, she said.

“We often see producers making planting decisions based on the total well supply capacity – gallons per minute,” Bell said. “But it is important that we are considering the planted acreage, so they are planting based on the gallons per minute per acre (gpma). We are seeing many wells drop into the 3-4 gpma range. At those capacities, planting decisions are about managing the water today as well as managing to extend water resources for future irrigation and generations.”

It is not uncommon to see corn planted with irrigation supplies less than 3 gpma, but this significantly increases in-season production risks, she said.

“We are becoming too dependent on variable in-season precipitation to meet the crop water demand. By concentrating irrigation supplies on reduced acreage, the farmer may have the ability to maximize corn production and profitability as well as maintain a drought-tolerant crop such as cotton.” 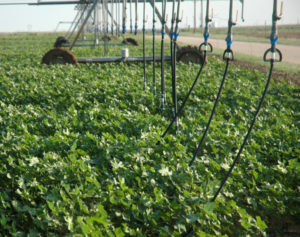 Cotton requires less irrigation for a shorter period of time than corn.

Although cotton has the ability to compensate over several weeks with many fruiting positions, Bell said there is not enough data on how early and early medium maturity varieties respond to irrigation timing and rate in the northern Texas High Plains. Because cotton maturity classes set and retain bolls differently, there is a need to look more closely at how to manage not just varieties but maturity groups under irrigation.

“In this region, it is not just about variety selection or irrigation management, but it may be a strategic preplant decision considering both the variety maturity class, irrigation capacity and even knowledge about the companion crop,” Bell said. “Because producers are sharing water with corn, and there is not a good time to stress corn, we want to manage the cotton so that we can optimize production and profitability for both crops. I do not believe producers can afford to let one crop suffer.”

Continued research is important to provide producers unbiased information about how to optimize the productivity of both crops, she said. It is not just about putting a seed in a hole and watching it grow.

What the trials show

Bell conducted a trial in 2019 in collaboration with the North Plains Groundwater District to evaluate initiation of irrigation timing. They grew three early maturing and three early mid-maturing varieties under two irrigation strategies.

Last year was a rough year for Texas High Plains cotton, Bell said. Weather delayed emergence and slowed growth. But by mid-June, conditions warmed up and the crop took off. By July 31, they had put 2 inches on one side and none on the other, but the difference in yield was only really seen in the early varieties.

She said withholding irrigation until peak bloom caused the early varieties to shed upper and exterior blooms and bolls.

“Once the early varieties are done, they are done,” Bell said. “But with the early mid-maturing varieties, there surprisingly wasn’t a big difference between yields by withholding the water until peak bloom. They have the ability to compensate. So, the question becomes: What water supply do you have and when do you decide to implement your irrigation? Knowledge about how varieties respond to water is very important for a farmer with limited water.”

Making dollars and sense with cotton

It really does become a question of what the best option is for each producer, Bell said. The first strategy made 158 more pounds of lint or $82 more per acre assuming the base loan value of 52 cents per pound. That’s pretty significant. However, it is always important to consider the cost of the water. Figuring in an average cost of irrigation, the actual profit may be closer to $57 acre.

“While we want to increase both lint and profit there could be a cost by initiating irrigation at pin-head if we are also irrigating corn. We did not factor in the associated yield loss if we were withholding irrigation from the corn crop. For northern High Plains farmers, it really becomes a systems decision.

“Strategic use of irrigation resources will allow farmers to successfully grow cotton and extend irrigation,” Bell said. “Cotton provides farmers the ability to reduce irrigation demands because we have the ability to strategically apply the water. It’s not the only drought-tolerant crop, but it is an important one to our cropping systems and water supply.”

Kay Ledbetter is a communications specialist with Texas A&M AgriLife Extension in Amarillo. She may be reached at skledbetter@ag.tamu.edu