Here’s a ‘Plan B’ for Palmer pigweed escapes after dicamba, 2,4-D

Some reports have come from folks concerned by the lack of Palmer amaranth response to applications of dicamba plus glyphosate applied in the last 10 days. I expect to get more of these calls as I have seen similar results in our research this spring.

The half-pound rate of dicamba plus glyphosate applied to 3- to 6-inch tall Palmer amaranth is resulting in about 60% to 70% control two to three weeks after application in some of our research. The Palmer in these studies that escapes the herbicide application grow very little for about 10 days. These escapes then get a second wind and start rapidly growing, typically from lower auxiliary buds. 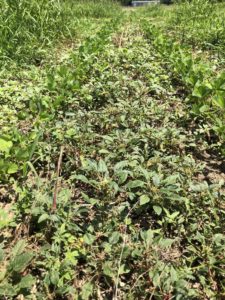 I went back and looked at research with dicamba in 2014 to 2016 and the Palmer amaranth control two weeks after one application consistently ranged from 87% to 99%. So why the poor control now?

Greenhouse research this past winter suggested that the Palmer amaranth in at least some of our fields is evolving increased tolerance to dicamba. We have field research at Jackson and in a few farmer fields in other counties that would back up those results.

This should consist of a pre applied herbicide that is effective on Palmer amaranth overlaid with another effective herbicide post about 14 to 20 days later. This must be the primary way to control Palmer in Xtend soybean.

The total post approach has not worked well in our research even if a herbicide that offers some residual control of Palmer amaranth is added to a dicamba plus glyphosate post application (below). 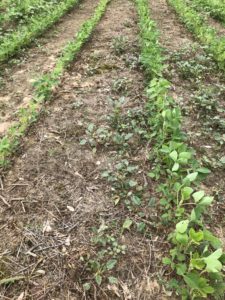 In cotton, Liberty still appears to be effective and should be the “go to” to control Palmer amaranth that has escaped a dicamba application. Moreover, consider getting the hooded sprayers back out and applying diuron + MSMA.

What about Enlist crops? Unfortunately, the standard 32 oz/A rate of Enlist One + 32 oz/A Roundup PM appears to be controlling Palmer amaranth no better than the standard dicamba + glyphosate applications in a couple tests at the station this year.

Fortunately, Enlist One can be tankmixed with Liberty and that tankmixture has been consistently good at controlling Palmer amaranth. As such it should be the “go to” for Palmer amaranth from here on in Enlist crops.