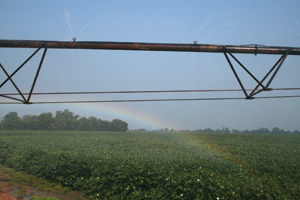 Water, or the lack of it, obviously can have a serious impact on a cotton farmer’s bottom line. “If you don’t have water, you definitely will not maximize the yield potential of your chosen varieties,” says Dr. Ed Barnes, Senior Director for Agricultural and Environmental Research at Cotton Incorporated.

Water stress is one culprit that can lead to micronaire problems and a host of other quality-related issues – which can then lead to potential discounts at the classing office. On the other side of the coin, over-application of water wastes energy.

The public focus on cotton’s water usage is not just hype. The amount of water a commodity uses is now being looked at by many non-governmental organizations and sustainability groups to determine how the cotton industry should be ranked against other commodities and businesses.

“There have been some organizations that have released information, which was less than accurate about how much water cotton uses, and we are addressing that ‘misinformation’ because it could be damaging to cotton’s ranking as well as the public’s perception of cotton as an apparel fiber based on that ranking,” says Barnes.

While drought persists in several regions of the Cotton Belt, other regions (especially the Mid-South and Southeast) have had to deal with re-planting issues because of too much rain. So why should cotton farmers in those rain-soaked regions worry about irrigation?

“For farming operations in the Mid-South and Southeast, rainfall on average exceeds the amount of water needed by a season’s cotton crop, but there have been many years where rainfall has not fallen in an evenly distributed pattern, and there have been some cases where pocket droughts have led to complete crop failures,” says Barnes.

When climatic conditions present this type of localized scenario, irrigation can provide relief from short-term water stress. “Irrigation can prevent yield loss of up to 70 pounds of fiber,” says Barnes.

Averaged over 20 years, yield increase from irrigation is 150 pounds of fiber – using data from Arkansas, Mississippi and Louisiana. There is a cost, however, to pump water.

“For every inch of water applied to an acre, it takes about one gallon of diesel to pump that water from a depth of 100 feet,” says Barnes.

He and his cooperating researchers across the Cotton Belt hope to demonstrate to producers that through careful management of water resources further regulation of irrigation water can be avoided.

Moving forward, adopting new and effective technology will offer producers the ability to conserve and/or maximize water usage. “In the next 50 years or so, technology will most likely solve some of our water problems,” says Barnes.

“These developments are slow to come, so we have to make the best use with the limited freshwater resources we have. For that reason, water and how to use it continues to maintain a visible presence in our research.”

The Cotton Board, which administers Cotton Incorporated’s Research and Promotion Program, contributed information for this article.

Because it funds almost 400 agricultural research projects each year, the development of research strategies play an important role in Cotton Incorporated’s Agricultural and Environ-mental Research division. Its four-fold strategy for dealing with agricultural water is outlined below:

1. Maximize Rainfall Capture – Use farm ponds, conservation tillage to increase the water-holding capacity of the soil and cover crops to reduce runoff.

2. Optimize Irrigation Water – Get the “most crop per drop.”

3. Increase Water Use Efficiency – Breed for varieties that maximize the use of water.

The Power Of Partnering With University Extension