Seminole, Texas, cotton farmer Abe
Froese Jr., who has been a Deltapine NPE farmer for eight years, says his
DP 1522 B2XF yielded well and “held very good in the burr even after the
untimely rains.”
Photo by Brad Robb

The steel blue eyes of West Texas cotton farmer Abe Froese Jr. are slightly shaded from the high-noon Texas sun by the brim of his black John B. Stetson cowboy hat as his head turns to gaze across his Lea County, N. M., cotton field.

“This field looks good. I was worried about how well it would take the rain, but she held up,” he says, pointing to an endless white blanket of DP 1522 B2XF that could yield between 3 and 4 bales an acre.

Froese’s father farmed cotton. So did his grandfather. Cotton farming isn’t just in his blood; it is in his heritage. The Seminole, Texas, farmer will have his 15th production season under his Texas-size rodeo belt buckle by the time the gins turn out his last bale. Froese also produces cotton in Gaines and Donley counties in Texas, while overseeing an additional 300 acres of chili peppers and 20 acres of jalapeños.

A baseball fan for years, Froese follows the Texas Rangers and the Houston Astros. He has seen lot of curve balls in his lifetime, but not all of them have come from 60 feet 6 inches away. The most formidable foe with whom he competed in 2015 was Mother Nature.

“Boy, did we get moisture. Don’t get me wrong, though, we needed it. Unfortunately, it came in the frozen variety – hail,” Froese says.

After replanting once, he thought the crop was on its way when round two came across the state. Froese replanted again, had to deal with the management difficulties that come with replanting, and then the late season rains hit. Remnant weather from Hurricane Patricia brought more showers, and he thinks that might be the reason for some preliminary grades coming back a little barky.

“We only had to drop three shots of Pix on it so it wasn’t too hard to manage, and the variety I went with, DP 1522 B2XF, just boomed out of the ground with good vigor and held very good in the burr even after the untimely rains. And I do love the yields,” says Froese, who has been a Deltapine New Product Evaluator (NPE) grower since the program’s inception eight years ago.

At 3,660 feet above sea level, the region where Froese farms cotton has historically low nighttime temperatures, which seem to always inhibit micronaire development. So each year, he tends to choose a variety that may have a tendency to produce higher mic values.

“While some of my friends who farm cotton in lower elevations across the state complain about high mic, I always ask which varieties they chose. If I decide to go with that variety, our nighttime temperatures seem to help balance out cellulose development, which keeps us in a good mic range,” says Froese, smiling. 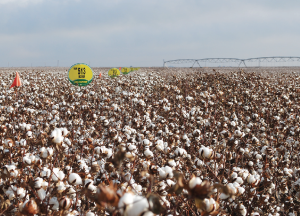 Froese takes care to manage his irrigation equipment properly
during the growing season and has installed monitoring control programs on all of his pivots.
Photo by Brad Robb

The chalky gray soils in his area may not be an agronomist’s dream, but he has learned to deal with them. While most farmers in areas across Texas claimed 2011 was their worst year of farming ever, it was one of the best for Froese.

Always trying to improve his farming efficiency, he put GPS on all his tractors recently and installed monitoring control programs on all of his pivots.

“With GPS on the tractors, our drivers are less fatigued, and they can also pay more attention to the equipment behind the tractor to make sure it’s doing what it’s supposed to do. The control systems on my pivots have almost paid for themselves simply by the time they’ve saved me from having to ride around to my fields and verify they’re working properly. I have full control of them with my phone, can start and/or stop them and even get a reading of ongoing water pressure,” explains Froese, as he shakes his iPhone like a new toy.

As most cotton farmers know, pivots must be managed properly. Froese started plugging the nozzles around the pivot tracks to reduce water levels that accumulate near the tires so the  “tracks” don’t get too deep. Across the field next to those tracks, the cotton doesn’t yield as much as the rest of the field, but it is a small price to pay to keep the pivot rotating freely around the field.

“The pivot control system has been a lifesaver,” he says.

Excited About The Future

A strong family man of deep faith, Froese is lucky to have a good support system at home. Wife, Nancy, and children, Chelsey (20) and Justin (17), all help with farm-related duties. Despite their hectic school schedules, Chelsey and Justin are both farm-equipment qualified and can be found driving tractors or hauling trailers to the fields where Froese may be planting or running the Hi Boy sprayer.

“My daughter is attending Odessa Col-lege, working on her degree in elementary education, and Justin is battling high school in Seminole. Both of them are great helpers and are invaluable when it gets busy around the farm. Nancy is my rock and does a great job keeping our on-farm records. She really goes the extra mile during harvest season by cooking lunch, and sometimes dinner, every day for all 12 of my farm workers. I’m very proud of my family and blessed to have them,” he says.

As he winds down 2015, Froese is already looking ahead to his 16th season of producing cotton in West Texas. The former bull rider loves a challenge. Although the sight of a high-yielding field of Deltapine cotton may not send the same level of energy-pumping adrenaline through his veins like an 8-second ride on a 2,000-pound bull, it does send an enjoyable feeling through his soul and always puts a smile under his John B. Stetson.