Sometimes a man just needs a chance to prove himself. For Bronwood, Ga., cotton farmer Neil Lee, that chance came in 2002 when the manager in his father’s farming operation left to take another job.

“I had two years at Georgia Southern University under my belt and had begun classes at Georgia Southwestern when Dad told me about the vacant position,” remembers Lee, thinking in the back of his mind that this might be the chance to start his farming career. The 22-year-old Lee told his father, Ronnie, he would like to take over the position because nobody else would care as much about the operation as a family member. Ronnie Lee didn’t have to consider it for long and said, “Let’s give it a shot.” 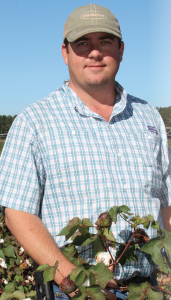 Bronwood, Ga., cotton farmer Neil Lee has been a Deltapine NPE farmer for eight years. In 2015, he planted DP 1553 B2XF, a variety that sustained his yield expectations from Deltapine varieties at harvest. Photo by Brad Robb

Neil Lee has been running the crop production side of Lee Farms and learning the intricacies of farming ever since. In 2015, Lee and his farm team planted 5,500 acres of cotton in the heavy red clay soils of Lee and Terrell counties. At the beginning of the 2015 ginning season, they hoped to press 90,000 bales by the time gin stands shut down for the year.

“We had targeted rains as we were trying to harvest. Unfortunately, the target was directly over our cotton – while fields 2 miles down the road got nothing,” says Lee, shaking his head in frustrated disbelief.

He is quick to admit the one constant on which he can count is the cotton seed he chooses to plant. He relies on Deltapine varieties to produce yields he must have to remain profitable and quality characteristics the cotton market demands.

“Deltapine is a stalwart brand that performs so consistently in our long-season growing environment. We planted DP 1558NR B2RF because of its nematode resistance, but the incredible yields were a bonus. We also planted DP 1553 B2XF because of its vigor and consistent high yields. When the 7760s finally got in the field and started harvesting, the yield monitors immediately sustained our expectations,” adds Lee, who has been a Deltapine New Product Evaluator (NPE) farmer for eight years.

GPS technology guides all of the farm’s equipment. Yield mapping and soil sampling allow Lee to go back, look at those samples and overlay them with yield maps to identify nutrient-deficient areas where he can prescribe more inputs to improve productivity next season.

The challenges that plague Lee’s operation are similar to other farms in Georgia and across many parts of the  Cotton Belt. From resistant weeds to maintaining reliable labor, Lee knows he has to plan ahead to stay ahead.

“We really need dicamba to receive final approval. Getting that extra tool would significantly strengthen our weed control program, especially if it comes in a high-yielding Deltapine variety. We also need to do a better job keeping records, because in these times of low commodity prices, you have to know your cost of production to know when to pull the buying trigger,” says Lee.

A Family Man At Heart

Living in Bronwood, Ga., affords an avid hunter and fisherman superb woods replete with trophy buck, and lakes that make it easy to keep a freezer fully stocked with fillets, but Lee admits one thing – he just doesn’t have time.

“I would love to spend some time hunting and fishing. We have trophy deer in this area, and you’d better have big game line on your reel or you’ll lose more fish than you catch. But, when it’s fishing season, I’m planting and when it’s hunting season, I’m harvesting. I guess it’s just the nature of farming,” explains Lee, while admitting he’s not complaining at all.

He is just happy when he, his wife, Ashley, and daughters, Addie (10) and Caroline (6), manage to break away during the summer to spend a little time on the lake.

Neil’s family has its footprint throughout the entire Lee Farms operation. Neil’s oldest brother, Ron, not only runs the gin and warehouse, he is also responsible for marketing the farm’s commodities, as well as the cotton for their ginning customers. Chandler, the middle brother, oversees the trucking side, as well as the brokerage house. They all report to their dad, industry leader Ronnie Lee, who splits his time between the farm and serving agriculture on more boards than can be listed in this article.

“We’re a true farming family with deep roots. This farm is our home. This is where we all raise our families, so we treat this land and our employees with the utmost respect,” says Lee. 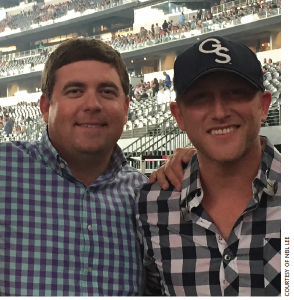 When in his truck, country music echoes from front seat to back seat, and most of the time it is the voice of Neil’s childhood friend, Cole Swindell, with whom he hums along. “Cole and I grew up together. My father and Cole’s mother were close friends. We started riding to school, hanging out and playing sports together. He’s a talented guy who took a chance as a writer/singer, worked hard, and now that effort is paying off,” explains Lee.

Lee has remained friends with the guy who continues to attract more fans with each song he writes and record he releases. Swindell’s first three songs all climbed the charts to No. 1, and his fourth single, “Let Me See Ya Girl,” is riding a fast bullet to that No. 1 position as well.

“We never even talked about music growing up, and now he’s on the fast-track to become a country music star. It’s funny how things work out,” quips Lee, as he smiles and tips his hat back on his head.

Truer words could not be spoken by a young man from Bronwood, Ga., who also took a chance when it was presented to come back to a family farming way of life.

Brad Robb is a freelance writer based in Collierville, Tenn.