I’ve resisted writing this post for 5 years because I think estimating lint yield from boll counts only provides enough insight to differentiate between poor, decent and good cotton. Still, I understand the temptation to count one’s chickens before they hatch. In this blog, I highlight a few issues with estimates and define the number of bolls required to produce one and two bales at various row spacings and patterns.

Lint yield per acre is ultimately a function of number of harvested bolls per acre multiplied by lint weight of harvested bolls. As a result, it seems logical that one could estimate lint yield with confidence soon after the last effective bloom date.

Unfortunately, these estimates may only fall within hundreds of pounds of actual lint yield per acre.

Error in the estimate stems from two issues. First, estimating harvestable boll number per acre is challenging. In order to get a good estimate, it is best to count bolls which you believe will be harvested within a minimum of 10 row feet from several areas throughout the field.

That distance really represents the minimum — counts from 20 or 30 row-feet provide much better estimates. Unfortunately, these counts are extremely time consuming. Furthermore, several things can prevent bolls present in September from making the basket.

The main issue, however, is accurately estimating average lint weight per boll. Boll size varies by year, by cultivar, by node and by position on each sympodial branch. Lint percent also varies by all of the aforementioned factors.

The issue with this approach is larger bolls at the bottom of the plant open first, almost guaranteeing an overestimation of boll size. If you want a better estimate of boll size within each field, you must wait until all bolls which will make the basket have matured and opened. . . . and by then, the picker will also be in the field. 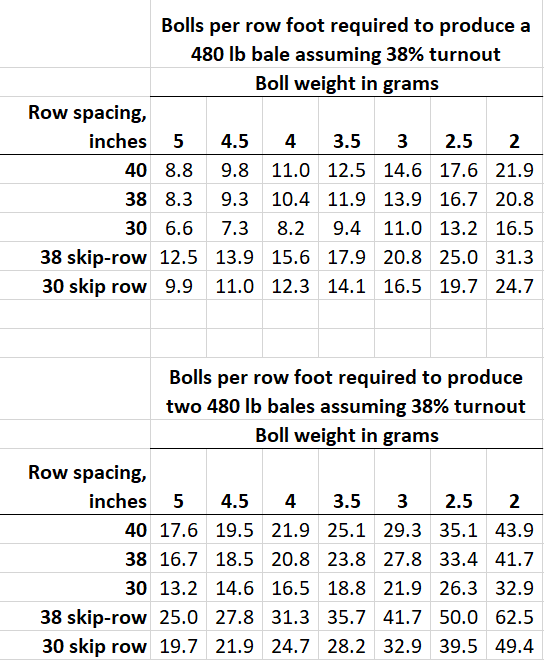 Quality estimates of lint weight per boll and number of harvestable bolls per acre are required to generate accurate lint yield estimates, and these two numbers (boll number, bolls per acre) are very hard to estimate. I would not carry a boll count estimate to the bank.

Dr. Tyson Raper is University of Tennessee cotton and small grain specialist. He may be reached at traper@utk.edu.

Share
Facebook
Twitter
Linkedin
Email
Print
Previous article
USDA-NASS Issues Season’s First Estimates For The Texas High Plains
Next article
In Arkansas, ‘We Have What We’re Going To Have On The Plant Right Now’