Want To Save Money? Plant On Flat Beds

Raised beds have been the standard row configuration in the West since modern cotton farming began more than 100 years ago, but that doesn’t mean all Arizona producers have to be tied to the method.

In Coolidge, Ariz., several producers have been planting their crops on level ground with borders for irrigation. It is a traditional method for crops such as grain and alfalfa, but, as a cost saving method, it is becoming very popular for cotton. 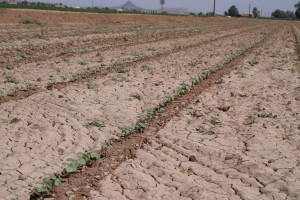 Producers can save money and water by planting their cotton on flat rows.

Wuertz should know about water conservation. His family has raised cotton on drip irrigation, a major water saver, in Coolidge for many years. However, on ground that is leased or where the cost of drip irrigation installation outweighs the advantage, planting on level ground seems to give the producer a savings advantage.

Pat Cockrill, another producer in the Coolidge area, says he saves a great deal on his water bill as well.

“It depends on the year,” he says. “We can save at least half an acre-foot and sometimes close to a full acre-foot of water.” He doesn’t want to exaggerate the volume of water savings, but, with the cost and availability of water in the area, any savings can help the bottom line.

Irrigation on flat-planted plots is more labor intensive than conventional planting due to shorter set times and rapid changes as the large sets of water move quickly through the field in two or three hours, instead of six on traditional raised bed rows.

And, in an area where water costs continue to rise and availability is declining because of the drought, savings in water are very important.

Tillage Reduction
Both producers rolled off good lists of savings and advantages associated with the method, including less cultivation, quicker soil warming for planted seed, ease of harvest and less time in the field.

Several producers in the West have planted level in association with lowtill and narrow-row conservation practices, planting into a cover crop such as grain or corn stubble. But, the trending practice in Coolidge, while giving a nod to those conservation methods, is really based on cost savings.

“We don’t have the water to double crop,” says Cockrill. But crop rotation is important in his area where wheat and alfalfa are part of that process.

On Cockrill’s farm, the cotton is planted in 38-inch rows within 24-foot borders. He has tried 30-inch rows in the past, but the larger width works best for him, greatly eliminating the possibility of boll rot.

“Diesel prices are down,” says Cockrill, but the cost of putting a tractor through the field is still high. An initial application of fertilizer is put on the field by tractor, and the rest is put on through irrigation or products that are flown on. Except for field prep, tillage is cut down to almost nothing.

Most of the ground that goes into flat bed planting has been laser leveled. The borders are left up between harvest and cleaned between crops.

Ease Of Harvest
Wuertz says that there is less work during crop harvest as well. “You don’t need to plow down the ends before you pick,” he says. “There are no (raised) rows the picker has to access, and it’s easier to run a boll buggy when it’s flat.”

Overall, the producers in the Coolidge area who are planting on a flat bed are happy with the cost benefits and are planning to continue the practice.

Brent Murphree is the Cotton Board’s Regional Communication Manager for the West. Contact him via email at bmurphree@cottonboard.org.