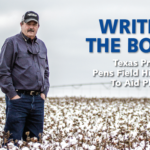 West Texas Producer Keeps Field Histories To Track Trends And Help With Future Seasons’ Planning By Vicky Boyd, Managing Editor — Kevin Belt farms by the book.The producer of cotton and other row crops near Plainview, Texas, keeps a three-ring notebook with him to record agronomic activities throughout the season. Each field has its own page, where Belt notes variety, ... END_OF_DOCUMENT_TOKEN_TO_BE_REPLACED 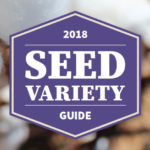 Yield, Quality And Traits The menu of cotton varieties from which to choose in 2018 includes a host of high-yielding, good quality selections. To help you get started, seed companies from across the Cotton Belt provided information about their headliners on pages 10, 11, 12, 13 and 16 in the annual Seed Variety Guide published by Cotton Farming. Discuss priorities ... END_OF_DOCUMENT_TOKEN_TO_BE_REPLACED

Thriving In Cotton Series Kicks Off In November Are resistant weeds a problem on your farm? Is bacterial blight or nematodes keeping you from reaching top yields? To help cotton farmers make next season their best yet, PhytoGen is sponsoring a Thriving in Cotton series beginning with the November issue of Cotton Farming. Each column will focus on a different ... END_OF_DOCUMENT_TOKEN_TO_BE_REPLACED

Taking it to the field 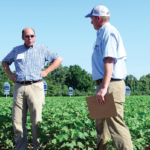 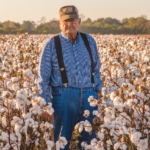 Alabama Farmer Anticipates 69th Crop By Carroll Smith Editor When referencing events that happened almost a century ago, most people preface their anecdotes with, “I have a photograph.” Otis Shiver begins his stories with, “I remember….” This 93-year-old cotton farmer was born in the Rocky Hill community of southwest Alabama on the Alabama River in 1924. “I came up through ... END_OF_DOCUMENT_TOKEN_TO_BE_REPLACED 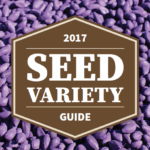 Delivered As Promised The menu of cotton varieties from which to choose in 2017 includes a host of high-yielding, good quality selections. To help you get started, seed companies from across the Cotton Belt provided information about their headliners on pages 8, 9, 10 and 12 in the annual Seed Variety Guide published by Cotton Farming. Think about your priorities, ... END_OF_DOCUMENT_TOKEN_TO_BE_REPLACED 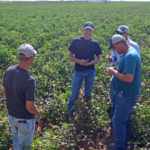 Cotton producers in West Texas got a sneak peak at up to a dozen potential new varietal releases during Deltapine's annual field day at Blaine Nichols Farm near Seminole. Nichols and his father, Mark, are two of about 200 producers nationwide that participate in Deltapine's NPE, or New Product Evaluators, program. For the past 10 years or so, the Nichols have planted advanced experimental lines in large 3- to 5-acre plots. They farm the plots as they would their commercial acreage, with each plot being harvested, graded and milled separately. Come December or January when the data on the experimental varieties has been disseminated, NPE producers participate in a conference call to vote on the varieties they think should be released. Between the experimental and commercial varieties, the Nichols have about 20 Deltapine large-scale plots on their farm this season. Mark says they continue to participate because of the benefits the NPE trials provide the industry. Blaine says he's anxious to see how the new XtendFlex system will work once the low-volatility formulation of dicamba is registered. The varieties have been engineered to contain genes that impart resistance to both glyphosate and dicamba herbicides sprayed over the top. Although the Nichols have several XtendFlex varieties on their farm, the plants were only sprayed over the top with Roundup. Blaine stays on top of weeds using the Roundup Ready system as well as several different residual herbicides. He also has adopted a zero-tolerance approach to weeds, but he says controlling Palmer amaranth and Russian thistle as well as a host of others is a constant challenge. END_OF_DOCUMENT_TOKEN_TO_BE_REPLACED